The second edition of the Gamesa Soccer League kicked off with much fanfare on the 27th of September 2016. Teams from across the country were in the fray for the title. There were first time entrants to the competition in the girls of the Gudalur Giants, the girls from Leher Foundation – Mumbai and the girls of Energon Eagles.

A total of thirty two teams competed across four categories – U14, U18 and U21 boys and the open category for girls. Teams from twelve centers of Slum Soccer and one from our partner organisation, Leher Foundation were in contention for the title and the prestigious Fair Play award.

The teams began arriving in Chennai from their respective hometowns on the morning of the 26th. The Energon Eagles, Gudalur Giants, Kolkata Kings, Leher, Nagpur Nonstoppers, Theni Maestros, Tuticorin Titans and Udumalpet Warriors joined the teams from Chennai – the Chrompet Cannons, Mylai Magicians, Santhome Superstars, Shollinganallur Supremos and Tondiarpet Tornadoes, to form the talented and highly competitive pool at the Gamesa Soccer League 2016.

The excitement of the teams was palpable, with even the long train journeys not deterring the participants from interacting with each other and forging instant bonds hours after their arrival to Chennai. “The team is looking forward to the competition. It is our first time in Chennai and we hope to have a good tournament” said Gaurang, the coach of team Leher.

The morning of the tournament saw the teams kitted out in their respective jerseys, with the captains proudly holding aloft their team flags. The ceremonial parade saw the participants march for a stretch of a kilometer to the venue, displaying their team crests. The parade helped attract interest from curious onlookers, who were delighted to hear of the tournament and about its participants. The five local teams joined the eight outstation teams at the venue to complete the line-up. The myriad of colours against the backdrop of the stunning green turf made for a visual spectacle. Once by the pitch, the teams proceeded to settle into the stands while the captains, bearing the flag, stepped on to the pitch. The captains and teams were received with a warm round of applause.

After a walk around the pitch by the captains, the second edition of the Gamesa Soccer League was officially declared open. The five-day tournament was underway, with the promise of quality football, new friendships and many a stars to shine both on and off the pitch.
After a round of group matches, the top two teams from each group faced each other in the semi-finals at the knockout stages. The winners progressed to the final while the teams that lost played for the 3rd and 4th place finish.

Five action-packed days at the Gamesa Soccer League culminated on the 1st October with four finals scheduled for the evening, across each category – U14, U18, U21 and Girls.

The Girls finals saw the match up between the Shakti Girls of Nagpur Nonstoppers and the newly crowned zonal champions in Shollinganallur Supremos A. The experience of the Nagpur Nonstoppers was enough to see them through the final, while the Shollinganallur Supremos A put up a worthy fight. The post match camaraderie between the girls, with team Nagpur consoling the runners-up was heartwarming and encapsulated the spirit of GSL.

The U21 final was a repeat of last year’s fixtures with the Mylai Magicians taking on the Udumalpet Warriors. The contest was close, with both goalkeepers being kept busy throughout the tie. The Mylai Magicians however were able to get the decisive breakthrough. Helped by goalkeeper Ramesh’s solid work between the sticks, they were able to keep the Udumalpet Warriros at bay to win the U21 category for the second year in running.

The dignitaries greeted the players before kick off and shared their thoughts on the Gamesa Soccer League at the close. Shri. Pandiarajan spoke of the power of sport as a tool for social change and commended the efforts of Gamesa and Slum Soccer in conceptualising and executing a project such as the Gamesa Soccer League. Mr. Bharat Joshi highlighted the life lessons one can learn through sport citing the example of the grace of the girls from Nagpur on winning the final.

The prize distribution saw the players lined up according to the table in each category. Apart from the team awards, there were individual honours for the best goalkeeper, most promising player and top goalscorer in each of the four categories. The prestigious fair play award was also a key reward for the participating teams. Energon Eagles, Tondiarpet Tornadoes, Gudalur Giants and Tuticorin Titans walked away with the fair play award in the Girls, U14, U18 and U21 categories respectively. The proceedings came to a close with Coach Muththamizh of the Theni Maestroes being adjudged the winner of the Best Coach Award.

The turf was then opened to the players for some music and revelry, with the teams leaving to their hometowns bidding goodbye to the many new friends they made over the course of Gamesa Soccer League 2016. 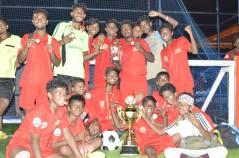 Projects, tournaments, ideas. Our new Slum Soccer blog is meant to inform you regularly about what we do and what we plan. We will keep you up to date. Visit our homepage for more information: www.slumsoccer.org